This page is meant to give a broad overview of the most common problems with the 2011 GMC Terrain.  2011 is the 2nd model year of this vehicle.  The Terrain is built on the Theta platform, which it shares with the Equinox.  There’s an emphasis on engine problems and transmission problems, since those are the ones that’ll keep you from moving.

There were a total of 206 complaints made to the NHTSA about the 2011 GMC Terrain.  Analyzing this data is a great way to determine the most common issues that can happen with your vehicle.  206 complaints out of hundreds of thousands of vehicles is a good sample of what can go wrong, but is not an indication that there are tons of problems with the 2011 Terrain.  US News and World Report rates the reliability of the Terrain as AVERAGE.

The Top 5 Areas with Issues are: 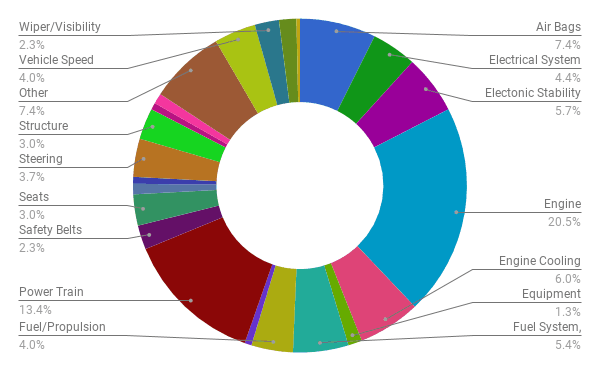 For the most part, they were fairly reliable motors. The number engine problem for this model year is aggressive oil consumption in the four-cylinder version. Here are the most common engine problems with the 2011 GMC Terrain.

Oil Consumption– The reason that the engine causes such a high percentage of problems with the Terrain is oil consumption.  The 4 cylinder version leaks oil really bad.  It is a known issue.   These cars are out of warranty, for the most part. Most of the time, when taken to the dealer, an entire engine rebuild or replace is how they solve the problem.

Stalling–  One of the most common issues reported with the 2011 GMC Terrain is stalling out.  The problem is that it can stall at speed, which can be dangerous.  It’s not nearly as prevalent as the Oil consumption issue.

Chattering on Startup –  One of the most common issues with this model year is a chattering sound when trying to fire up the engine.  It sounds rough, and will normally only do it for about 10 to 15 seconds after startup.

The 2011 Terrain was equipped with six speed automatic transmissions. They could be manufactured both stateside and in Korea. The 6T45 is a relatively trouble-free transmission. We’ll line out some of the more common problems with it below.

It is considered to be a fill for life transmission. That means that as long as it is operated under normal conditions, it will not require any transmission fluid change. That doesn’t mean that if you are using your Terrain to tow, or for heavy-duty work, that you shouldn’t have it serviced.

Many of the problems that occur with this transmission can be attributed to the fact that it is fully controlled by the engines computer. It uses shift solenoids to accomplish this. When one of them goes bad, it can adversely affect the performance of the transmission.

Here are the main symptoms of a bad Terrain shift solenoid.

Most of the problems that occur with a 6T45 shift solenoid are caused by the coil wire going bad in some way. It can go bad in a couple of ways. The plunger can also get stuck. We’ll cover the why and the how here.

You can test the solenoids with an OHM meter. You should be looking for 20-30 ohms of resistance. If no resistance is found, than you know that the solenoid is bad, and that it is broken. If the reading is less than 20 ohms than it’s probably melted. There’s more on both of those conditions and what causes them directly below.

One of the greatest benefits to a fully electronic transmission is all of the great data that they gather and store in the computer. You can use this information to laser pinpoint exactly what part of the transmission may be failing. Here is a great glossary of all 6T45 trouble codes from Transmission Builders Network.

The great thing about using the trouble codes to diagnose the problems with your 2011 GMC Terrain transmission is that it takes almost all of the guess-work out of it.

Many folks complain a lot about the 6T45 hunting for gears. In a quest to hit ever tightening CAFE fuel economy regulations, the 2011 GMC Terrain will shift A LOT. This doesn’t necessarily indicate that there is anything wrong with the transmission itself. It just takes a little getting used to.

There were 3 recalls issued by the NHTSA for the 2011 GMC Terrain.

Key May Be Removed in Gear– Typically, the ignition key should only be removable while in park. This helps to eliminate any vehicle roll aways. GM Recall #50491 or #50490

Seat Height Adjuster Bolt can Fall out– This recall is only applicable to vehicles with power height adjustment. The bolt may come out and the drivers height in relation to the wheel may lower. This can lead to an increased chance of crashing. GM recall # 14271

Safety Belt Anchor– The software that controls the defrost system can fail. When it does visibility may be compromised. Gm recall #100370

If you are would like to schedule service for any recall, or confirm that they have been done, contact GMC customer service at:

You may also wish to check out 2011 Chevy Equinox Problems, since they share the same platform.