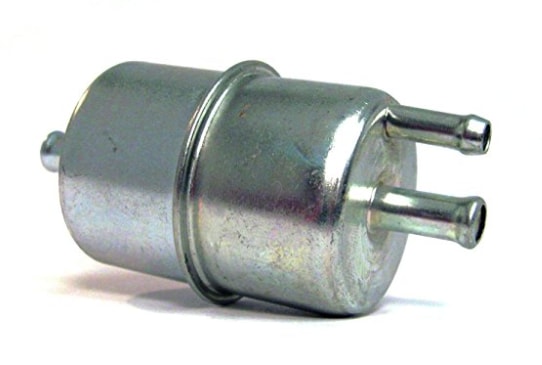 One of the worst problems that can happen to a motor vehicle is when the fuel filter goes bad.  When the filter goes bad, it can limit the amount of fuel that enters the engine.  With that in mind, most of the symptoms of a bad fuel filter have to do with the car stalling out.

Fuel filters have been making a rearward progression for the last 50 years.  For a long time, you’d find it under the hood.  It looked like a little pill, and it would be quick and easy to replace.  This was in the era of carburetted vehicles.

These fuel filters were more reliable, but they also were tougher to change.  It meant getting under the car and disconnecting steel fittings.  It really still isn’t that difficult to deal with, as long as you give the vehicle a few minutes for the fuel pressure to go down.

The trend for the last 20 or so years to move the fuel filter into the gas tank with the fuel pump.  This means that you will either have to drop the fuel tank (most vehicles) to change the filter.  Some vehicles have an access door built into the body.

If this is the case, you’ll have to either remove the rear seat or access it from the trunk.  It is a huge timesaver over dropping your tank, but it is still way less preferable to an inline filter.

The good news is, no matter how old your vehicle is, the symptoms of a bad fuel filter are universal.  It doesn’t matter if it’s in-tank or in-line.  And, fuel filters are cheap.

Signs of a Bad Fuel Filter

There are physical signs that you can feel when the filter is getting really clogged.   Before taking anything apart, check to see if your engines computer has any trouble codes saved in it.

The engine may throw a P087 trouble code.  This trouble code detects that the fuel rail/system pressure is too low.  Any trouble codes that exist could be a clue.  Sometimes when there is low fuel pressure, you may also get an oxygen sensor related trouble code as well.  The real issue with diagnosing a bad fuel filter is that it resembles many other vehicular issues in terms of symptoms.

There are also a few ways that the vehicle will tell you that the filter may be going out.  Here they are:

If your car isn’t starting at all, and you hear the fuel pump prime that is usually a good indication that the pump is working to some capacity.