P0357 is a generic OBD II diagnostic code that indicates an issue with the ignition coil “G” (it’s the seventh cylinder). Specifically with the primary or secondary wiring circuits.

P0357 is a relatively straightforward diagnosis and is typically caused by a bad coil pack or wiring harness issue, although other less likely factors can cause it. We cover the causes & diagnosis below. 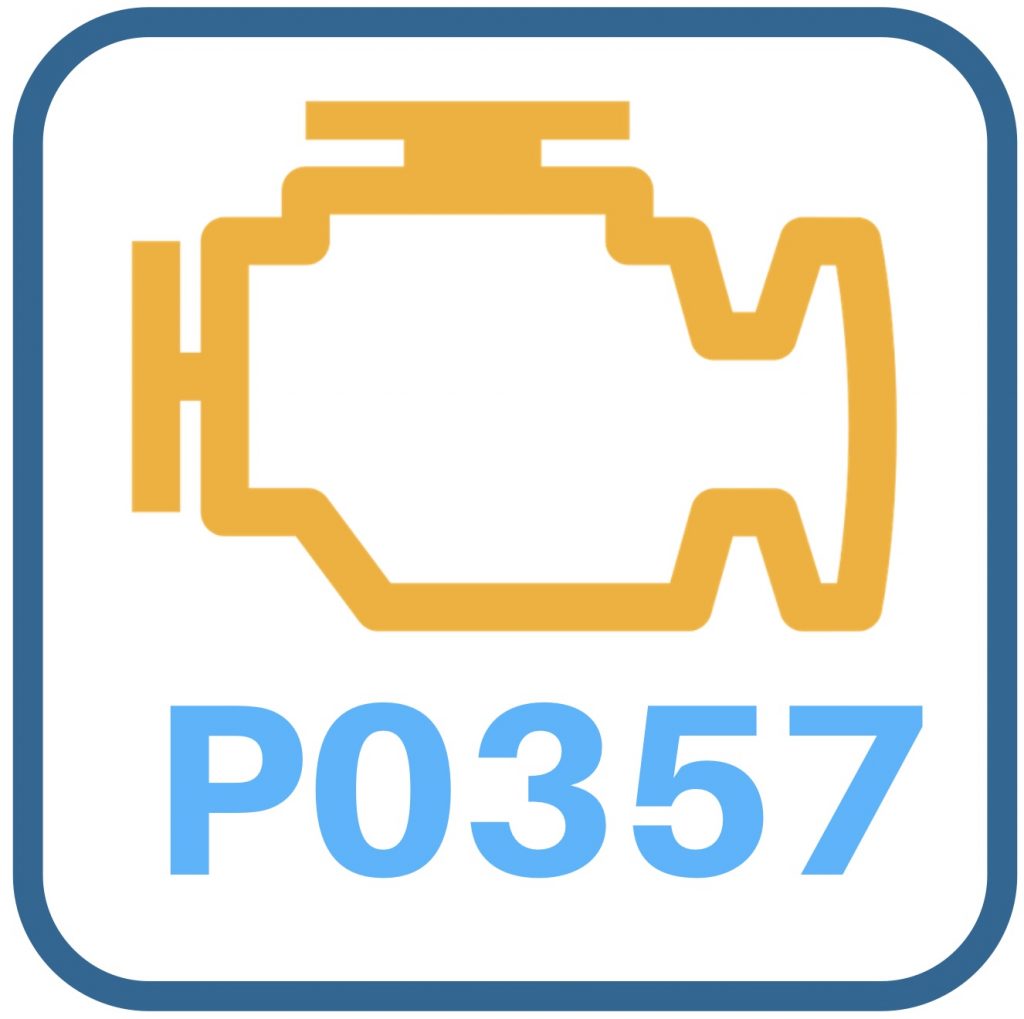 It’s essential to determine if it is the primary or secondary circuit that has thrown the code. Luckily, it’s easy to determine which one is at fault. Use the swap test method listed directly after this section.  You need almost no mechanical knowledge to perform this test, and it can really help you nail down what’s causing P0357 in your F150.

The secondary side of the equation is the spark side. The spark side is the plugs, plug wires (if so equipped), or the spark plug itself is causing your F150 to throw P0357.

Ignition Coil “G” indicates the problem is in the seventh cylinder.

You’ll need to look up which cylinder is number seven in your F150’s engine. Different manufacturers use different methods. Here’s a pretty good explanation of how how to locate cylinder 7.

There is a straightforward test to determine if the primary or secondary wiring has thrown this code in your F150. First, move the ignition components (coil pack, plug wire, plug) from cylinder 7 to another and clear the codes.

If the code moves to another cylinder, You now know it’s the spark plug, coil pack, or plug itself. You can keep doing this until you lock down the exact cause.

For instance, now that we know it has to be one of the components you moved, move them again, but leave one behind. Then, once the code stops moving with the parts, you know you’ve found what’s causing P0357 in your F150.  It may be time-consuming, but it’s guaranteed to work if one of these components is causing the code.

These are the most common problems that cause P0357:

The first goal of diagnosing P0357 is determining if you are dealing with a primary or secondary wiring problem in your F150. If you do that, you’ve eliminated half of the variables.  You can do that by doing the swap test or using a voltmeter.

The first place that you would want to start looking for what could be causing P0357 in your F150 would be the wiring harness. You can use a digital voltmeter to check if the coil pack is getting the proper signal. You would want to set it for A/C hertz and check to see if it is between 5-20hz (that’s the range for most coil packs).

If it was between 5-20hz, it’s doubtful that the coil pack has gone bad. However, it could be a bad plug or plug wire as well. If it has no signal, it’s time to look at the wiring harness. If you don’t have a voltmeter, you can use the parts swap method to help you determine if it’s the primary or secondary side causing your problems. See directly below ↓.

A great way to determine if it is an ignition-related component and not a wiring issue is to reset the trouble code and swap the coil, plug, and plug wire (if equipped) with another cylinder.

If the misfire “jumps” to the cylinder that you’ve just swapped your F150’s ignition components into, then you know that what you are looking at is a coil, plug wire, or (most likely) coil pack failure.

If the misfire did move cylinders, you can go ahead and replace the plug, plug wire, and coil pack. If you are on a tight budget, you can keep resetting the code and swap the ignition parts back one at a time until the misfire returns to cylinder 7. Start with the coil pack. The swap method is covered more in-depth in the section above.

If the misfire failed to move from the seventh cylinder, then you know that you most likely have an issue with the wiring harness going from the coil pack to your F150’s PCM/ECM.

First, take a look at where the harness plugs into the coil pack. Is it damaged or loose feeling in relation to the other cylinder’s connections? If so, you may need to replace the harness plug and pigtail.

If the misfire is intermittent, jiggle the wiring harness and see if it impacts how the engine is running. If it does start or stop misfiring, you know you’ve found your problem.

Look anywhere that the harness bends or touches anything sharp. Look to see if it looks burnt anywhere. Check for damage and repair the wiring accordingly.

If you still can’t find the problem, it’s time to take a look at the PCM. PCM issues are the least likely answer and an area where it may be time to call in the pros.

P0357 is usually pretty easy to diagnose through the swap test, even if you don’t have any special diagnostic tools. If there is anything you can add, please leave a comment below. Good luck fixing your F150!