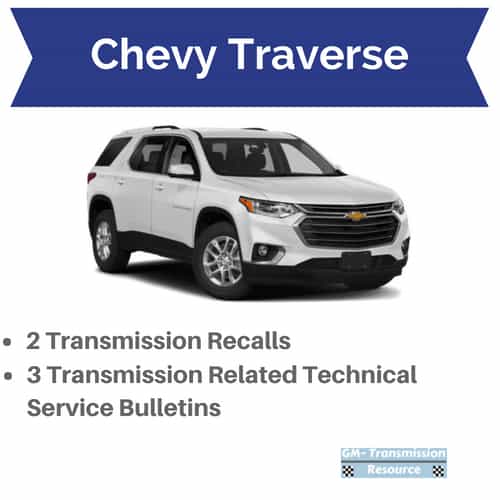 The goal of this article is to be a resource that will help you understand what may be wrong with your Traverse.  There are two main sections to this article:

The Traverse specific section deals with recalls and TSB’s (Technical Service Bulletins).  The general problem section deals with common Traverse problems.  This is a great way of doing research on potential transmission problems, since there needed to be enough examples of something going wrong for GM to make a public record of it.  This record would help mechanics diagnose the problem quickly.

After that, the next section has an emphasis on the 6T75 and 6T70‘s (these are the transmissions they come with) most common areas of weakness.

What transmission is in the Chevy Traverse?

The transmissions used in all Traverse models are:

The 6T75 and 6T70 were both transversely mounted 6 speed automatic transmissions.  Like all modern GM transmissions, they are controlled by electronically.  They don’t have an E on the end like other GM automatic’s because they never really existed in a time when transmissions weren’t controlled this way, therefore they do not require this designation.

There have been a few transmission recalls on the Chevrolet Traverse.  They are listed below.  Both of them involve the shift linkage coming out of adjustment.  This leads to potential roll away situations.  The affected years are 2014 and 2009.

Technical service bulletins (TSB’s) are an acknowledgment of a common problem by the manufacturer.  They are sent out to all of the authorized dealers for the vehicle and are a great source of knowledge when trying to troubleshoot an Traverse’s transmission.

If left unchecked, eventually the shifter indicator will no longer be accurate.  Eventually, the transmission may even lose the ability to go into park at all.  But, the gear selector will still slide into the park position, which makes the 2014 Traverse a roll away hazard.

The General Motors recall number for this problem is 14048.  Go ahead and give your GM dealer a call and see if this has been performed on your particular Traverse.  With the VIN number and that recall number, you’ll be able to schedule the free repair.

This is another one year only recall.  It is for an issue similar to the one listed above.  In this one, the 2009 Traverse shift adjustment cable may get loose.  Once it gets loose the shift indicator may show that it is in park when it’s in one of the moving gears or in reverse.  This means that any 2009 Traverse that has not had this recall performed is a potential roll away risk.

Being that the 2009 Traverse is about a 10-year-old vehicle, this recall may very well have already been performed on your particular vehicle.  It’s still worth giving GM a call and seeing if it has been performed.

This is one of the stranger TSB’s on this list.  That’s because it covers a wide range of symptoms.  The reason why it is such an eclectic list is because the problems are caused by the TCM and not any physical part going bad.  If you are experiencing any of these issues, it may be time to take your Traverse into the dealer and have the computer re-flashed.

Basically, if you have a 2009 Traverse, and the transmission is acting like it is possessed, go ahead and bring it in to have it re-flashed.

When this plate goes bad, it allows the piston to leak and not properly apply the gears.  And since this plate covers 3rd, 5th, and reverse only those gears are affected.  You’ll also get a service engine soon light for this particular issue.

There have been a few Traverse transmission recalls over the years, and quite a few Technical Service Bulletins.  The TSB’s and recalls are a great way to figure out what transmission problems that the Chevy Traverse might be having.  That’s because they are the problems that are so prevalent that the manufacturer needed to make the information public.  That’s always the best place to start your diagnosis.

Bad shifter alignment can cause the Traverse backup camera to stop working.

The 6T70 is known to overheat.  This is typically caused by a faulty circuit, and not an actual problem with the radiator/cooling system.

There are TSB’s listed above that do cover slipping gears, but other issues can still cause slipping.  All transmissions wear out eventually.  The Traverse transmissions are no different.  The problem is usually caused by a bad planetary gear or a bad solenoid.

Often the transmissions in the Traverse will stop shifting.  This is caused by a bad torque converter or brake switch.

Most of the common problems that occur with the Chevy Traverse’s transmission are related to electronics and how they are controlled.  The one nice thing about that is the dealer can fix it by hooking in a laptop a lot of the time.  Good luck with your particular Traverse!