The transmission fuses for the GMT900 Silverado is located under the hood right next to the battery.  You may want to check and see if the transmission fuse has blown if it’s stuck in limp mode. Limp mode is something that a transmission will do to protect itself from catastrophic failure.  For the Chevrolet Silverado and GMC Sierra (which’ll have a 4L65E or 6L80E) it’s going to make the transmission run in third gear when in drive, with an option to downshift it into second gear.

Please note that if you have a 2007 Silverado “Classic”, you’ll want to use the guide:  1999-2006 Silverado Transmission Fuse Location 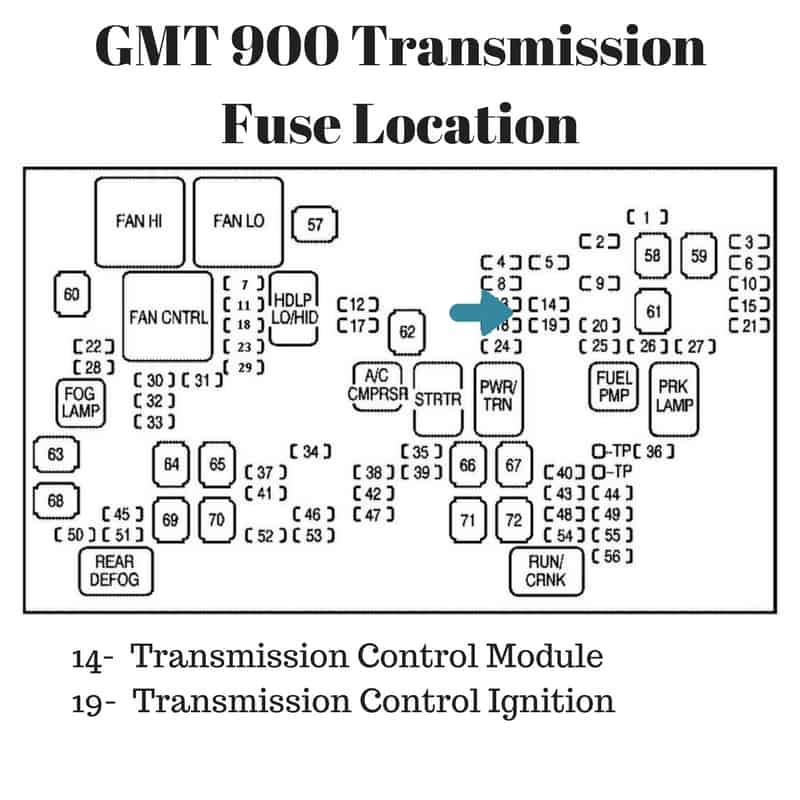 First thing that you’re going to want to do is pop the hood.  You’ll see a black box about a foot up from the battery on the wheel well.  Go ahead and pop that lid off.  This is the 07-14 Silverado’s transmission fuse location  It’s going to have a diagram similar to the one above.  It may vary a little bit depending on the year.

Once you pop the fuse box open you’re going to be looking for a fuse that says “TCM-bat“.  It’s highlighted in the illustration above.  It should be 15 amps.  There is also a fuse labeled “Trans Ign 1“.  They both are vital to the operation of the transmission.  The fuses are located in the same neighborhood on the gas and diesel versions of these trucks, although the numbering extra fuses in the diesel version will make it look slightly different.  They still have the same labels.

Please note that there can be slight differences between model years.  The layouts should be similar.  This example uses a 2008 Silverado.

You can either pull it and manually inspect it for damage, or you can use a test light.  I prefer the test light because it’s more thorough.  It’s possible for a fuse to be bad even with no visible damage.  With the test light, you don’t even need the Silverado transmission fuse pulled.  You just touch the top of the fuse on the part that’s designed for a test light and see if it’s hot or not.  It really is about that easy.

Symptoms of a Blown Transmission fuse on a 2007-2014 Silverado

If you came here looking for a blown fuse in your Silverado’s transmission, I hope you found it  There aren’t to many other ways of fixing your transmission that’ll cost maybe a dollar or two (fuses are cheap).