There’s nothing wrong with wanting to know what the differences are between a timing belt and a timing chain.  There absolutely are differences between the two.  When you first get started in the world of auto repair it can be easy to confuse the two, since most “timing belts” are actually timing chains, the belt terminology can be somewhat confusing. 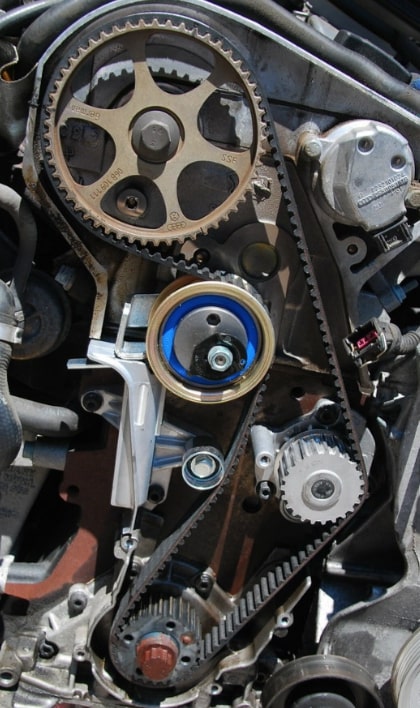 Differences Between a Timing Belt and Chain

Here are the main differences between a timing belt and chain:

What is a Timing Belt?

A timing belt is a rubber belt that connects to the crankshaft and camshaft sprockets.  It keeps the motor in time and is more likely to need changed during the life of a vehicle.  They are more prevalent on Japanese cars than any other type of vehicle.  They are not as common as they used to be.

What is a Timing Chain?

A timing chain has been used to keep the upper valve-train in sync with the lower half of the engine for almost as long as the internal combustion engine has been around.  It uses a chain and sprocket(s)much like you would see on a bicycle wheel.

The only real timing chain vs timing belt differences are the material that they are made from.  They both have the same exact function.

The timing chain is far and away the more popular of the two.  Auto manufacturers have been moving back toward timing chains as timing belts have shown to be a bit too problematic.

This article may seem very pro timing chain.  And, they are reliable.  But, they are not infallible.  They can still jump a tooth or break.