There are a lot of factors involved in timing belt replacement, which in turn can affect the cost significantly.  The make and model of the vehicle, as well as the type of engine, and how much room the mechanic has to work with all contribute to the cost of replacing a timing belt. 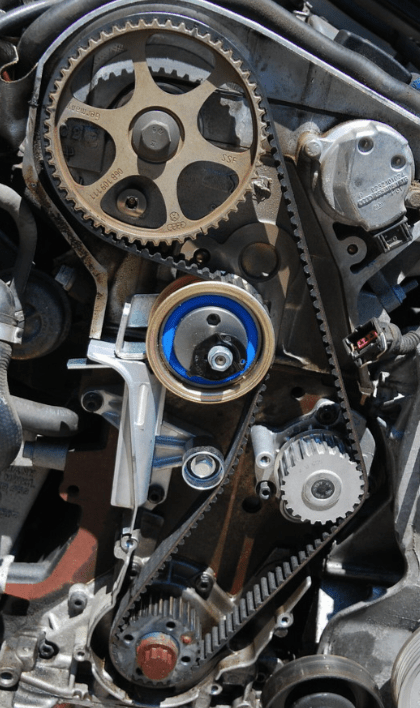 What a Timing Belt Does

Your engine’s timing belt is responsible for connecting the camshaft(s) to the crankshaft. Without the timing belt the valves would not open or close at the right time. So, it has a good name. It really does keep everything in time.

How Often Should You Replace a Timing Belt?

As the belt ages, it’ll dry out and lose some elasticity.  When a timing belt breaks your engine is dead in the water. It also can do a lot of damage. That’s why you should always follow the manufacturer’s recommended timing belt replacement interval. When you go over that time, you are risking that the belt might break, or jump a tooth.

One of the most popular vehicles in the United States is the Honda Odyssey. Honda recommends changing the timing belt every 60,000 to 100,000 miles.

As stated earlier, most of the cost associated with replacing your timing belt is going to be in the labor itself. That’s why it’s kind of difficult to get too into specifics. In our example vehicle from above, the Honda Odyssey, a timing belt itself is going to run right around 100 bucks or less.  A good kit with a water pump will be closer to $200.

The typical timing belt replacement is going to be between $500 and $1000 with parts and labor. There are certainly outliers on both sides of that figure though. At least 60% of the cost is going to be labor.

A four-cylinder engine is usually going to be less expensive to replace the timing belt than a six cylinder. This is due to the fact that there will typically be more room in the engine bay, and the job will be less complicated.

There are many parts that your mechanic is going to have to remove in order to get to the timing belt. Since they are in there anyway, they are going to be charging the labor to remove and put them back on. Having them proactively replace a few parts, can save you a lot of hassle down the road. Your mechanic is probably going to recommend that you replace these parts:

Don’t feel obligated to replace any of these parts if you are on a tight budget. They were all still working when your vehicle went into the shop. It’s more of a future proofing situation.

Here are some of the most common symptoms that a timing belt is going out.

A timing belt that has failed completely can lead to a lot of problems. A crankshaft will turn without turning the camshaft and the pistons will slap into the valves.

Replacing the timing belt is no easy task, even for an experienced shade tree mechanic. If you are going to do it yourself, make sure that you check a couple YouTube videos and see how they do it. Give yourself at least twice the time that it calls for to do the job.

Once you dig down to the timing belt, it’s really not that difficult to replace. It’s getting there that’s the problem. As mentioned above, you will need to take off the serpentine belt, and water pump to get to it most of the time. On some vehicles there could be less than an inch of free play to work with, which can make this job a bear.