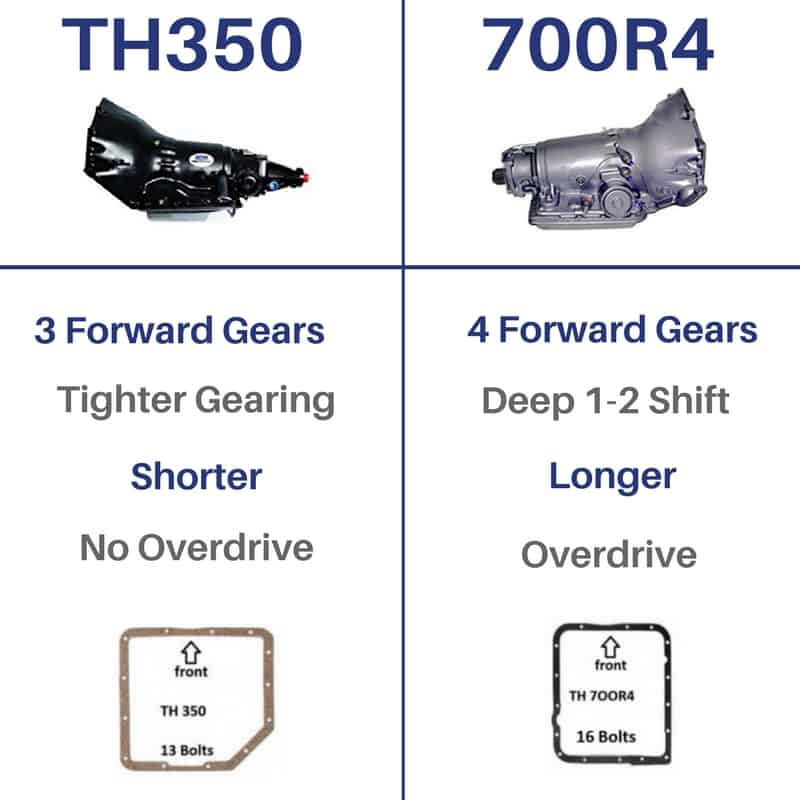 The TH350 was GM’s go to transmission for light duty vehicles from the late sixties through the early eighties, that is until the 700R4 and 200-4R began to replace it.  When comparing the TH350 vs the 700R4, there are quite a few differences.  The biggest one is going to be overdrive.

It is important to note that for all intents and purposes the 4L60 and 700R4 are the same transmission.  They are not the same as the 4L60E, which is computer controlled.

There are many differences between the TH350 and 700R4 transmissions.  We’ll get into them more below, but the largest ones have to do with how they are controlled, and one having an overdrive gear and the other one not having that gear.

There are many other differences between the two transmissions that are noteworthy as well.  This is a broad take on these differences.

There are really two major determining factors regarding which transmission is best for you.

Almost every modern car has an overdrive transmission.  If you didn’t grow up in the time when a TH350 equipped car would be in your daily driver, you may not remember the engine screaming down the highway.  It is not as fun as it sounds.

It’s much nicer to listen to the engine hum down the highway in overdrive sipping, not guzzling, the gas.  Unless you really want to do hardcore racing, you should take a look at the 700R4.