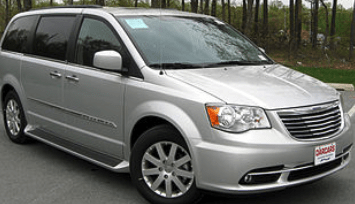 P219B is a generic OBD2 trouble code.  This code indicates that your Chrysler Town and Country’s air/fuel ratio is out of balance (too rich or too lean) on the bank 2 side of the engine in question.

The ideal air/fuel ratio for a gas engine is 14.7 parts air to 1 part fuel (14.7:1). If there is too much fuel or too much air in the mixture, the ratio is too rich or too lean.  P219B does not specify if your Town and Country’s air-fuel ratio is too rich or too lean.  There will likely be another code that will provide this information (P219B rarely appears by itself).

There is a bank of cylinders on each side of your Town and Country’s engine.  Bank 2 is the side of the engine with the second cylinder.  If bank one had an imbalanced air/fuel ratio, the code in question would be P219A.

Often, the only sign that your Town and Country has P219B is the check engine light.  Here are some of the symptoms that can occur:

Here is how you can go about diagnosing P219B in your Town and Country at home:

Sometimes leaking exhaust can be obvious. You’ll hear it. Sometimes, not so much. Take a look under your Town and Country at the exhaust and see if there are any soot marks where the exhaust is escaping.

It can be tough trying to chase down P219B in the Chrysler Town and Country by itself. So we always recommend taking a look at the other codes first.  Good luck!