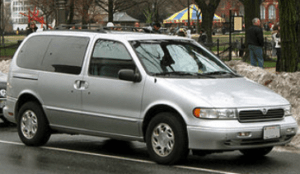 P1450 is a manufacturer-specific trouble code. In the case of Ford-made vehicles (such as the Mercury Villager), it indicates that the pressure in the fuel tank is not bleeding up to the engine. This code is very common, and not a breakdown risk when it appears by itself.

Far and away, the most common cause of P1450 in the Mercury Villager is a bad purge valve (there’s a section on how to test them below).

Your Villager’s EVAP system uses a purge valve to draw fuel vapor from the gas tank. The fuel tank pressure sensor sends the tank pressure value to the PCM.

There aren’t any noticeable symptoms associated with P1450 in the Villager. It should still run and drive fine with the check engine light on. However, it will fail an emissions test.

There aren’t many issues that will cause P1450 in the Mercury Villager. The most common one is a bad EVAP purge valve. There are a couple of different ways that you can test it.

Which type of purge valve your Villager has is going to depend on the model year and engine equipped.

If the purge valve draws a vacuum directly from your Villager’s engine (no line in), you can do this test, but you’ll need to remove it first. If it has a vacuum line in and out you can do this with it bolted to the vehicle.

When your Villager is not running, the purge valve should hold vacuum on the upstream side. You can use a vacuum pump to quickly test whether or not it is stuck open. The video below shows exactly how you’d go about doing so.

While the purge valve is the most common cause of P1450 in the Mercury Villager, it’s not the only one.

With P1450 in the Mercury Villager, the most common cause is a bad purge valve. It’s easy to diagnose, and cheap to fix. If it passes the test, look for a crimped EVAP line coming from the fuel tank, or a clogged charcoal canister. This can happen a lot after filling the fuel tank. Good luck!