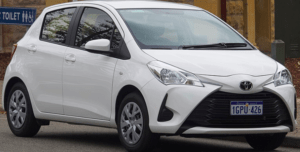 One of the most common trouble codes with the Toyota Yaris is the P0455 code. This trouble code references a number that is given to you when you plug your Yaris into a OBD2 scanner, and has to do with the emissions system. P0455 Indicates that there is a large leak in the evaporative emission control system (EVAP). It often appears with, or is related other codes, such as P0420, P0430, P0441, and very often P0440.

P0455 is normally not an immediate threat to the drive-ability of your Yaris. Certainly anytime the service engine soon light is on, it’s good to deal with it as soon as possible though.

P0455 is a universal OBDII trouble code. This means that regardless of which make or model of vehicle, the code will mean the same thing (Yaris or not). The code technically stands for:

The EVAP system captures all fuel vapor from the fuel tank and sends them to the engines intake in order to be ignited in the normal combustion process. When there is a large leak in the Toyota Yaris’s EVAP system, it will throw the P0455 OBDII Code.

There are many things that can cause the P0455 trouble code to trigger in your Toyota Yaris. Here are the most common problems that will throw the code:

A mechanic has a wide range of instruments at his disposal to diagnose what would be causing the P0455 in your Toyota Yaris. Here are the most common things that are done to diagnose the code:

While the trouble code may state that there is a “large leak” in the EVAP system of your Toyota Yaris, the actual leak will most likely still look rather small. The “large” really is referring to how much pressure is being lost.

Here are the most common Yaris P0455 fixes:

Good luck figuring out what is causing your Toyota Yaris to throw the P0455 code. We hope this helps. If there is anything that you feel like you could add, please feel free to leave a comment below.

While P0455 is not going to cause the Yaris’s engine to stop running, it should not be treated lightly. You could have a fuel leak. Pay extra attention to your tank level and make sure you are not leaking fuel. We recommend taking it in and/or dealing with it right away.