P0411 is a general OBDII trouble code, which means that it has the same meaning for the Chevy Cruze as it would any other car or truck.  By definition, the code is letting you know that the ECM has detected incorrect flow in the secondary air injection system.

The secondary air injection system injects air into the exhaust to help lower emissions.  Most of the time, P0411 is going to be caused by a failure in this pump or the one way check valve. But there can be other reasons the code is thrown as well.

P0411 can cause a few symptoms, and can affect the drivability of your Cruze.  The most common symptoms include: 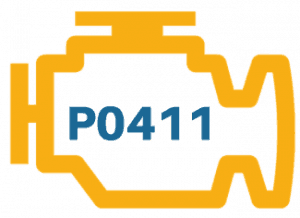 Typically, there are three main components to the AIR system.  They are the pump, hoses, and one way check valve.  All of this is electronically controlled, so checking the fuse to it is a great place to start.

A good scan tool will allow you to command the AIR pump on.  If it doesn’t respond, you’ll know that it’s gone bad.

Here’s a great video on diagnosing this code from Flat Rate Mechanic:

The most common cause of P0411 is going to be the one way check valve failing.  When it does, it allows moisture into the pump.  This moisture can freeze in the winter time.

If frozen water does freeze up the air pump itself, it may blow the fuse to it.  This fuse is typically under the hood of the vehicle.  That’s a great place to start looking.   It only takes a second to see if a fuse has been blown.

The AIR pump itself is the most common cause of P0411.  They are relatively affordable.  If they are no longer accepting instruction from the ECU, P0411 will be thrown.

An exhaust leak can cause the ECM to think that the AIR system is not working right.  Look for damage to the exhaust system.  If there’s a leak, you should be able to hear it.

P0411 in the Chevy Cruze is not likely to cause the vehicle to break down, but can affect drivability.  Any time the check engine light comes on, it’s a good idea to service it as soon possible though.