With the Pontiac Firebird, P0404 is going to have the same meaning as it would in any other vehicle. It’s a generic powertrain code that stands for:

While there are several issues that can throw the P0404 code in the Firebird, the most common issue is either going to be carbon buildup on the EGR valve, the EGR valve itself (going bad), or wiring issues.

Most of the time, the only symptom of P0404 is going to be the service engine soon light itself. The only exception to this is going to be when the EGR valve gets stuck open or stays shut and then throws the code.

Depending on whether the EGR Valve is stuck open or stuck closed is going to affect which of these symptoms are present.

If the EGR is stuck open you can expect a rough idle, stalling, worse MPG, and the smell of gas.

If the EGR is stuck shut you may experience pinging and detonation. This should be looked at by someone qualified to diagnose straight away. Detonation can lead to engine damage.

Troubleshooting the cause of P0404 in your Firebird isn’t that difficult. That’s due to the relatively short list of issues that would cause it, and the relative accessibility of the EGR valve in most situations.

Here are some of the most common causes of P0404:

It is very likely that the EGR valve itself is the cause of P0404. It may be stuck open or shut. The EGR’s job is to recirculate a certain amount of exhaust gas back into the combustion chamber.

When it fails to recirculate this gas it can raise the combustion chamber temperature. Here’s more on how to test an EGR from AxleAddict. If you end up determining that you need a new EGR valve, they are relatively affordable.

It is often possible to clean the EGR valve and be on your way. Here’s a great video showing exactly how to do just that. 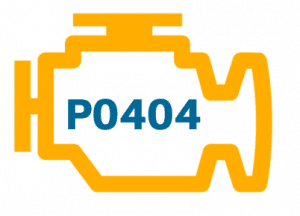 Although it is highly likely that the EGR valve itself is the cause of P0404, it’s always a good idea to start with the Firebird’s wiring itself.

Starting with the wiring is smart because it is both highly likely that it’ll be the reason why the code was thrown, and it’s not expensive to do.

You’ll be looking for an open or short circuit that would be keeping the EGR from operating properly. It’s also good to visually inspect the wiring harness plug at the EGR itself. If it is damaged, repairing it should solve the problem.

How to Diagnose Electrical Problems in a Car (aa1car.com)

There can be other things that cause P0404 other than wiring and the EGR valve itself. But, they are not very likely. Please feel free to leave a comment below if there is anything that you would like to add that can improve this article.