P0403 is a very common trouble code. It is a generic code, which means that it has the same meaning for the Audi Q2 as it would any other vehicle. It affects the EGR (Exhaust Gas Recirculation System and technically means:

A circuit malfunction implies that there is a wiring problem coming to or from the EGR system. That does not rule out the EGR solenoid itself. We’ll go into the most common symptoms and causes of P403 directly below.

As far as the average do it yourselfer being able to diagnose the cause of this code, it can be tricky since a good vehicle scanner and Ohm-meter can make the job a heck of a lot easier.

Most of the time, there will be no noticeable symptoms accompanied with P0403, with the exception of the service engine soon light itself.

While not typical for any other symptoms to show with the P0403, it is possible that the Q2 will misfire if the EGR system is stuck open.

The issues that are going to cause P0403 are going to have to do with the EGR solenoid, or the wiring going to or from it. While it is possible for something else to cause P0403, these are far and away the most likely reasons for the code to populate 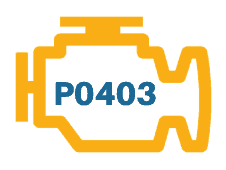 There’s going to be two issues that would cause the EGR solenoid not to operate, the solenoid itself, and the wiring going to it.

The EGR solenoid itself is often the cause of P0403. It can be checked with a good OBDII scanner and Ohm meter.

With the scanner, you’d want to command the EGR solenoid to operate. With the ohm meter hooked up, you should see movement on the gauge. If it’s not getting a signal, move on to the section directly below.

This video below is a great resource that’ll help you through the process of testing different EGR types.

If the EGR solenoid is getting the proper signal, it’ll be time to check it for a blockage. They can get really dirty over the years. If it gets stuck open or closed it can provide too much resistance to the ECM/PCM and throw the P0403 code.

Here’s a great article from Axle Addict on how to clean an EGR valve. If you need a new EGR valve solenoid, they are relatively affordable at Amazon.

If the OHM test fails, it’s time to trace the problem through the wiring harness. The PCM/ECM uses the ground signal to control the EGR solenoid. You’ll need to trace the wiring problem. Here are the most common issues:

Good luck diagnosing P0403 in your Audi Q2. If there is anything that you would like to add that could improve this article, please feel free to leave a comment or use the contact tab.