P0401 is a very common OBDII trouble code.  It has to do with the emissions system and stands for:

The EGR system on a vehicle is responsible for re-circulating exhaust gasses in order to lower the vehicles emissions output.  There are three main parts to the EGR system.  They are the EGR Valve, Differential Pressure Sensor, and the Actuator Solenoid.

P0401 is a general code, which means that regardless of the year (1996+ anyway) and the model, it’ll have the same meaning regardless of which manufacturer built the vehicle.

Most of the time there are not going to be symptoms when P0401 is triggered, other than the service engine soon light itself.  In some extreme cases, you may notice a slight ping or knock. 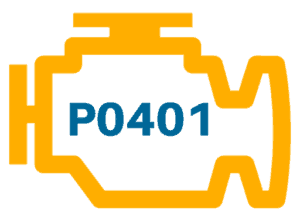 Diagnosing what is causing the P0401 code is typically not very tricky.  Here are the most common causes of P0401:

The good news with P0401 is that it rarely ever costs much money to fix, and it is usually pretty easy to get the problem, since it is right on top of the engine.  Most folks see P0401 Insufficient EGR flow, look up the price of an EGR valve, see how cheap it is and just throw a new one on.

That’s often a mistake.  That’s because the EGR valve is not going to be the culprit most of the time.  Here are some of the most common fixes to help clear the P0401:

Testing your EGR system is relatively easy to do.  The most challenging aspect is the DPFE sensor.  If you aren’t sure you can tackle that, you can always test everything else first.  By process of elimination, you can be relatively confident that the DPFE is at fault.  If there is anything you would like to add about P0401, please feel free to add a comment below.  Good luck!!