P0344 is an OBDII diagnostic code.  It is a generic code, which means that it has the same meaning for the GMC Acadia as it would any other vehicle.  If your Acadia has this code, it means that the PCM (powertrain control module) has detected that the camshaft position circuit is sending an intermittent signal. 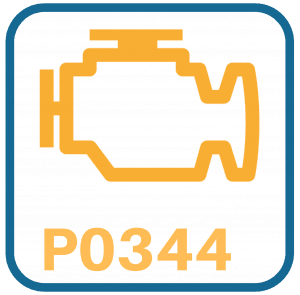 The symptoms of P0344 can vary quite a bit.  In some cases, the only thing that the driver may notice is the check engine light.  In other cases, your Acadia may not start at all.

The camshaft position sensor itself can go bad over time.  It will no longer be able to send a signal to the PCM and your Acadia will get the intermittent P0344 code.

P0344 is know to be triggered by a battery that has low/no charge.  If you’ve recently tried to start your Acadia with a battery like this, that may be what threw the code.  If there are no other symptoms other than P0344, and the battery was low/dead, it’s highly likely that’s what caused it.

This is one of the more commonly misdiagnosed codes.  Be thorough in your inspection of the wiring harness.  That’s usually the cause.  Also, the signal may be intermittent now, but it might not be long before it gets worse and your Acadia won’t start at all.  Try and get it repaired as soon as possible.  Good luck!