P0139 is a common OBDII code that occurs in many vehicles, including the Audi Q2. The code is triggered when there is an issue with the response time from the oxygen (O2) sensor when switching voltage levels.

The Oxygen sensors are responsible for helping the ECM meter oxygen levels in the exhaust, and helping to to create the ideal air/fuel mixture.

When they take too long to respond, the ECM can no longer depend on that information to manage the mixture.

There are also some less likely problems that can cause P0139. We’ll go over those below.

Sensor 2 = Aft of the Catalytic Converter

Typically, the only symptom of P0139 is going to be the service engine soon light. In some cases, there can be other symptoms as well. These symptoms include:

Often, the vehicle with P0139 will not pass emissions due to the higher levels of pollutants in the exhaust.  That assumes that the sensor is functioning properly and isn’t the reason why the code was thrown.

A poor air fuel mixture going through the catalytic converter can cause damage to it eventually.

Here are the most common issues that cause the P0139 code in the Audi Q2. They are presented in order (somewhat) of most to least likely to cause the problem. 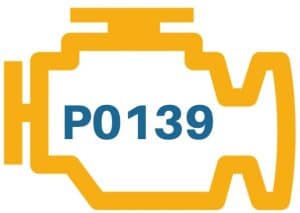 It is possible to diagnose the P0139 with a multimeter. If you use the multimeter, you’ll know whether or not the voltage coming to and from the oxygen sensor is within spec, this can help you determine if it’s your Q2’s O2 sensor, or wiring harness that’s the issue.

You can also use a voltage test light to determine whether or not the oxygen sensor is getting any voltage at all (they’re about $5 at Walmart).

If it’s not getting any voltage, attach the test light to the harness plug and shake the wiring a little bit. If the light comes on, even for a second, you know that you have a short circuit causing the P0139 trouble code.

Good luck finding whatever caused P0139 in your Audi Q2. If you have anything that you would like to add, please feel free to leave a comment below.