P0018 is a general OBD2 trouble code, which means that it has the same meaning and general symptoms for any vehicle (including the Chevy Equinox) it typically occurs when the Crankshaft Position Sensor and the Camshaft Position Sensor are out of alignment by a certain number of degrees, or if there is a sensor issue. We’ll explore the most common symptoms and causes directly below.

P0018 should be considered an important code to diagnose and repair. The crank and cam sensors work in tandem to produce the ideal air/fuel ratio for your engine. When this timing is off, the engine will typically not run (or barely run).

Here are the major symptoms of P0018 in the Equinox:

Here are the most common causes of P0018 in the Equinox, as well as diagnostic advice, and resources to further explore. It’ll either be a wiring issue, or it’ll be a physical problem (bad reluctor or timing chain jumped). 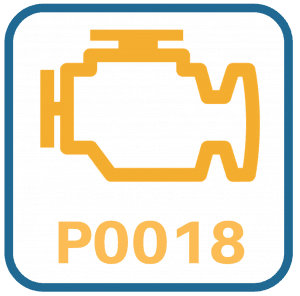 One of the most common causes of P0018 in any vehicle is going to be wiring issues. You’ll want to inspect the wiring harness for visible damage. A lot of the harness leading to and from the Crank/Cam sensors is going to be exposed to hot exhaust and vibration.

This is a great place to start diagnosing P0018 in your Chevy Equinox. It’s quick and easy to do this before moving on to the sensors themselves.

Make sure to check the harness where it plugs into both sensors as well.

After examining the wiring harness, it would be time to check the sensors themselves. Using a simple voltage tester, you’ll be able to determine whether or not they are functioning correctly. We’ve linked to a great video showing you how to do so directly below.

How to test a crankshaft or camshaft sensor (YouTube)

The timing chain or belt will throw cause P0018 to throw. This will happen when it has stretched or jumped a tooth or two. If it jumps more than a few teeth, the odds are that the engine itself will not run at all.

If you’ve recently changed the timing chain, it may very well have not been aligned properly on install. Many manufacturers (particularly Japanese Automakers) have very strict timing chain service intervals. If it’s been too long, it may jump a few teeth. Even the slightest misalignment can cause P0018.

The Crankshaft Sensor is going to use a tone or reluctor ring to determine the position of the Crank. This ring uses notches that are scanned by the Crank Sensor in order to get an accurate position.

If this ring fails, the vehicle will not be able to get an exact crank position. The camshaft typically will have a ring that provides the same function.

Often when a reluctor ring goes bad, it’ll rattle quite a lot. That is a very good indication that there is an issue with it.

Good luck diagnosing P0018 in the Chevy Equinox. If there is anything you would like to add that could help the next person reading this page, please leave a comment below.