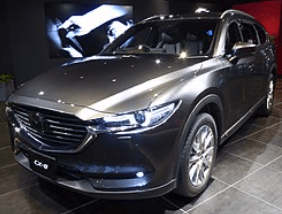 If your Mazda CX-8 is shutting down while driving, it’s a real safety hazard.  Vehicles are a lot harder to control without power brakes or steering.

Directly below is a list of the most common reasons why your CX-8 would randomly die while driving.  It may help you in your diagnosis.  But, before taking a look at anything, is the check engine light on?  If it is, you’ll want to start with whatever trouble code you get from an OBD2 scanner.

Parts stores can scan it for you if you don’t have access to a scanner.  But we don’t recommend driving anywhere until your CX-8 is fixed, since dying at the wrong time can cause a collision.

Another common reason that your CX-8 may be starving for fuel is a bad fuel pump.  The fuel pump is responsible for sending highly pressurized fuel to the fuel rails.  The engine can die if the fuel pressure is not high enough to properly atomize the gasoline properly.

The engine needs a strong ground to the chassis in order for your CX-8’s various electrical systems to work.  If that cable is corroded, there could be problems such as misfiring, slow/no starts, or even the engine dying while driving.  This is a common cause of many “gremlins”.

The alternator is responsible for charging the battery, and keeping your CX-8 running.  If the alternator goes bad, the vehicle will run off of the power supply in the battery (which is there mostly for starting the vehicle and as a backup reserve).

If there’s anything that you would like to add that could help the next person with their CX-8, please leave a comment below.