One of the most serious issues that can happen to your Acura MDX‘s engine is if it ends up with low oil pressure.  Low oil pressure will cause the engine to seize up.  When the oil pressure light on, it should be assumed that the engine locking up is imminent. We advise not running the engine until the issue can be properly diagnosed.

There are many things that can cause low oil pressure.  Below, we’ll review the most common causes: 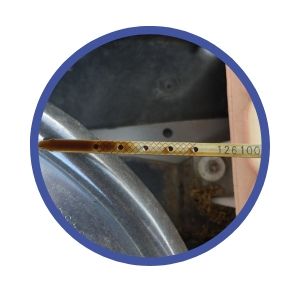 The number one reason that your MDX would have low oil pressure would be a lack of oil.  The first thing you should do, is check your engine oil level.

If the engine oil level appears to be low (or empty), you’ll need to fill it up. Do not drive a vehicle with low engine oil to the store to buy more oil. Running without enough oil to keep pressure in the crank case will certainly look up the engine.  It’s not a matter of if it will lock up the engine, it’s only a matter of when.

The oil pump is responsible for taking the oil from the oil pan and pumping it through your MDX’s engine.  When it begins wearing out, its ability to pump oil will be diminished.

There is a screen in most oil pumps that keeps large debris from entering.  Eventually though, enough debris can enter the pump to do some lasting damage to the pump capacity.

If the oil level is significantly lower in the pan than it should be, air can get into the oil pump and aerate the oil.  Think about it like the foam on a cappuccino or beer.  It’s the same liquid, but has totally different characteristics when foamy.

This same problem can occur when there is too much oil as well.  Check the oil level and make sure it’s ok, and that it looks ok.

Engines that run long enough without any sort of regular oil change schedule can get so dirty on the inside that it begins to build up inside the crank case. Or, the oil itself could just be so dirty that it no longer cycles through the engine properly, which causes low oil pressure.

If you have no idea when the last time your MDX’s oil was changed, or if you happen to have done a lot of towing, or if your oil change is overdue, changing the oil itself may vary well solve the problem.

There is a tube in your MDX that takes the oil from the pan to the oil pump.  This is called the pickup tube.  This tube can fall out, which will cause no oil to get to the oil pump.

Modern engines use a bypass valves to keep oil flowing to the engine even when the filter is clogged.  This bypass valve is activated when there is too much resistance from the oil filter. This valve can only allow so much oil through, and may trigger the oil light.

Here are a few of the steps that you can pursue to diagnose your low oil pressure condition:

As stated above, checking the oil level in your MDX is definitely the place to start diagnosing low oil pressure.  If the oil level is really low, you’ll need to fill it up until it’s back to the full mark.  This may solve the problem.

Keep in mind that if the oil has leaked out once, it will leak out again.  You’ll need to start checking it much more often.

Check to See if the Oil Pressure Sending Unit is working

Modern vehicles use an electric oil pressure sending unit.  If your MDX’s sensor has gone bad, it’ll shoot a false low pressure reading to the ECM.  One of the first things that people do when they have the low oil pressure light is to change out this sensor to see if that rectifies the problem.

Here’s a good article on how to check the oil pressure sensor from itstillruns.

Take it to the Mechanic

Anything after the first two steps is best left to the professionals.  Low oil pressure can blow your engine quick.

Always treat low oil pressure in your MDX seriously.  If there is no oil pressure the engine will lock up and fail very fast.  We recommend having a mechanic take a look at it.  Good luck!