There are quite a few reasons why your Ford F150 could be idling rough.  An internal combustion engine needs air, fuel, and spark in order to achieve ignition.  When one or more of these variables is off it can lead to a rough idling condition.  Most of the time the culprit is going to be the ignition system, although there are a myriad of other causes.  We’ll cover the most common causes of rough idle below.

Hopefully, the check engine light is on.  It can tell you a lot about what is going on with your F150.  You can either go to the local parts store and ask them to scan the vehicle for you, or you can do this yourself.  Most of them will do that as a courtesy (obviously they want to sell the parts).  Alternatively, code scanners are pretty affordable.  Having one of your own can save you a ton of time.

Once you get the trouble codes you can use that information to determine whether it’s an O2 sensor, spark plugs, coil packs, etc that may be causing the trouble.  Here are the most common problems that would cause a Ford F150 to idle rough:

Here are the main components of the ignition system, as well as what would cause them to make your F150 idle roughly. 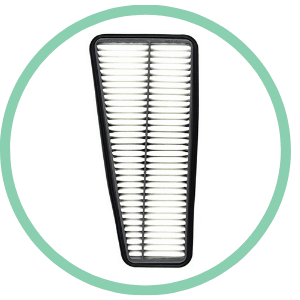 If you have reason to suspect that your F150’s air filter has not been changed in a very long time, or if you have recently been driving in tough conditions, it may be worth taking a look at it.

It could be so clogged that there is not enough air getting through for quality idle conditions.  In fact, if your check engine light isn’t on at all, checking out the air filter would be a great place to start.  It’s readily accessible, often the problem, and super cheap and easy to replace.

The oxygen sensors that are equipped in your Ford F150 are responsible for monitoring the exhaust to help the ECU determine the correct air/fuel mixture.

Of all the sensors equipped in your vehicle, the O2 sensors may have it the hardest.  They deal with super hot exhaust that can cover them in deposits that can leave them ineffective.  The heat of the exhaust can also bake the wiring going to/from them over time.

If an oxygen sensor goes bad, it can make your F150 run too lean (or rich).  A super lean running engine will often idle rough.

There are many reasons that your Ford F150 may be idling rough.  We tried to lay out the most common ones above.  Try and go off of the OBDII codes if you were lucky enough to have them.  If there is anything else that you would like to add, please leave a comment below.  Good luck!!