Bad Coil Packs are one of the more problematic ignition issues that can occur with the Ford F150.  A bad oil pack can make your F150 almost un-drivable.  Or it may have little effect at all on the engine’s ability to run.  It’ll get worse as they lose their ability to fire the spark plugs.

Coil Packs take the place of the distributor and coil in older vehicles.  They receive instruction from the engine’s computer on when to fire the spark plugs.  The symptoms of bad coil packs are almost the same as bad spark plugs.  So much so that it’s actually a better idea to look at the plugs first.

If you do need to replace them all, they can be somewhat pricey.  It is possible to isolate which coil pack is bad by using a multimeter.  Here’s a great YouTube video on how to do just that.  This can save you a lot of money over just replacing the whole set at one time.

There are a lot of potential symptoms related to bad coil packs in your F150.  We always recommend using an OBDII scanner to pull your trouble codes if the service engine soon light is on.  It can really narrow your search down.  If you don’t have one, your local parts store can do this for you at no charge.

Here are the most common symptoms of bad coil packs:

The check engine light is one of the most common symptoms of bad Coil Packs. More often than not, your engines computer will be able to detect bad Coil Packs in your F150.

There are other misfire related codes as well. 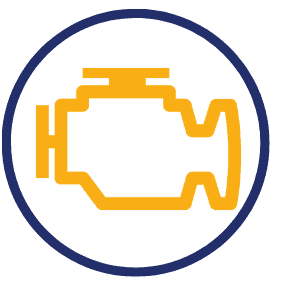 As you hit your F150’s gas pedal, the fuel and ignition systems respond.  If acceleration has diminished, it should be felt.  The less cylinders that your engine has, the more that one cylinder not firing properly will have an effect on engine performance.

If you have one or more bad Coil Packs, it’ll cause the acceleration of the F150 to be weaker, and you’ll probably feel a jerking sensation.

The less efficient the combustion of your engine, the more fuel is going to be wasted.  This leads to a decrease in fuel economy.  When you take your vehicle in for a tune up due to decreased fuel economy, checking the ignition system in general (including the coil packs) is going to be one of the very first places that a mechanic is going to look at.

Misfiring is the most common symptom of bad Coil Packs. Anything else that you may feel is a result of the misfiring itself.  The real question is, what is causing the misfire?  There is more to your F150’s ignition system than just the coil packs.  There’s also spark plugs and plug wires.

There are also non ignition related circumstances that can cause a misfire.  That would include lack of fuel pressure, bad fuel injectors, or even a timing chain (or belt) that has jumped.  Since there are so many reasons that a vehicle can misfire, we recommend testing for trouble codes first.

When a Spark Plug is misfiring, it is often most pronounced at idle speed.  This is because when the engine turns slower, it is easier to detect.  You’ll feel a rough vibration.

Be aware that almost all symptoms of a bad coil pack in your F150 could also be other issues with the ignition system as well.  Good luck diagnosing the problem!  Feel free to leave a comment below if there is anything that you would like to add.