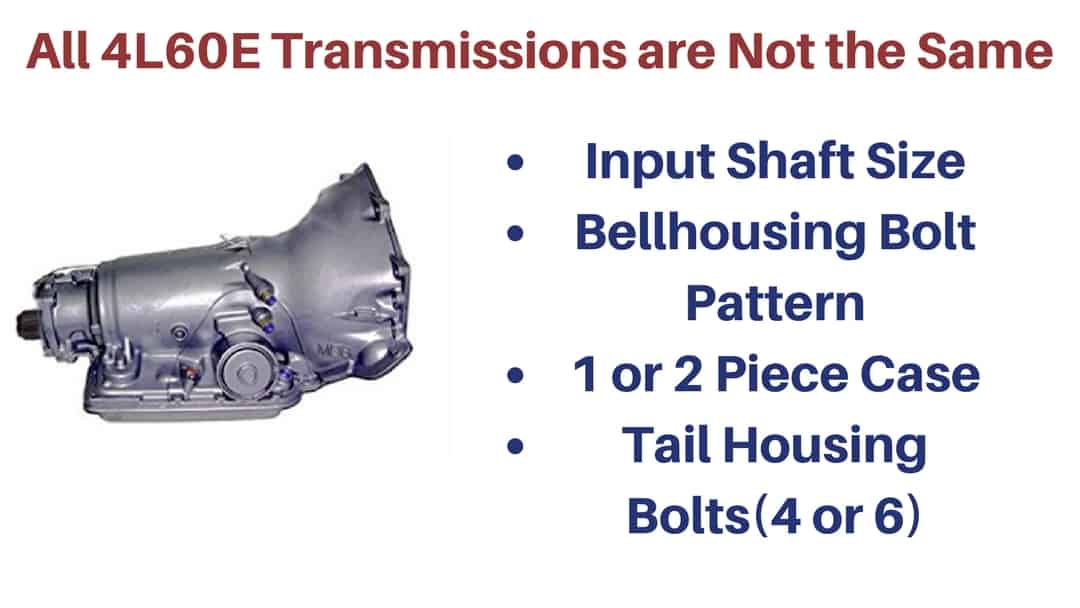 The 4L60E transmission was found behind the majority of GM rear wheel drive vehicles for the almost 20 years.  Are 4L60E transmissions the same?  No they are not.  More importantly, not all 4L60E transmission are compatible with one another.  We’ll go over some of the bigger differences in order to help you better understand what is different about them.  Bottom line here is, don’t replace your 4L60E with any random 4L60E.  It can cause quite the headache.

When the 4L60E went into production, it was being put behind the small-block Chevy and many smaller V6’s, predominantly in pickup trucks, Camaro, Corvette, Impala, Caprice, and so on.  By the time it started getting phased out of most pickup trucks in 2008, the 4L60E there was no SBC or any other motor from the early nineties in regular production.  It was going behind the LS based motors or the longitudinal six cylinder found in the Trailblazer.

That’s a lot of time for one transmission to be in production.  Here’s a nice graphic with the biggest variations in the 4L60E.

What parts of the 4L60E transmission are the same?

The length of the total transmission stayed the same for its entire production cycle.  This means that a 4L60E made in 1993 would theoretically bolt behind one that was made in 2003.  Practically though, it wouldn’t bolt up without an adapter, since the SBC and LS1 versions used different input shaft lengths.

The transmission pan bolt pattern is the same, regardless of the year that the 4L60E was made.  They have the same gearing, regardless of what year or model that they are from, so you don’t need to worry about that.

4L60E transmission bellhousings are not the same

One of the main differences in the earlier and later 4L60E transmissions is the bellhousing area.  In the earlier versions, the case was cast as on piece of aluminum.  In the later versions of it had a removable bellhousing.  This makes it a bit easier to put behind an engine that it wasn’t originally intended for.

There are tons of 4L60E transmissions out there.  You’ll have a much better time finding the proper transmission that goes with your vehicle than taking a chance on one that was meant for something else.  It can cause a lot of problems if you bolt a 4L60E that is not quite the same as the old one to your motor.

The easiest way to tell where the 4L60E in question came from is to look at the sticker that GM puts on top of the transmission.  That’ll tell you all about what year it was manufactured and what vehicle it came in.  For more on that you can always check out the 4L60E identification page on this site.

Conclusion:  Are all 4L60E transmissions the same?

No they are not all the same.  Don’t waste your time and money replacing your 4L60E with one that is not going to work properly with your vehicle.  Good luck!