If your Toyota Rav4 is running hot, it is a serious problem.  If it gets too hot, it leads to overheating.  A hot engine is usually caused by a few different things, such as the thermostat, water pump, radiator, or outside conditions.

Obviously, the main symptom of running hot is going to be the engine temperature gauge or warning light is on.  This article is written to help you figure out why your Rav4 may by running hot.  If it’s overheating, it would be better if you read this article: Toyota Rav4 Overheating Diagnosis.  An overheating vehicle can potentially have other symptoms as well.  But, the causes are usually the same.

Common Symptoms of an engine running hot include:

Here are some of the most common reasons that your Rav4 would run hot: 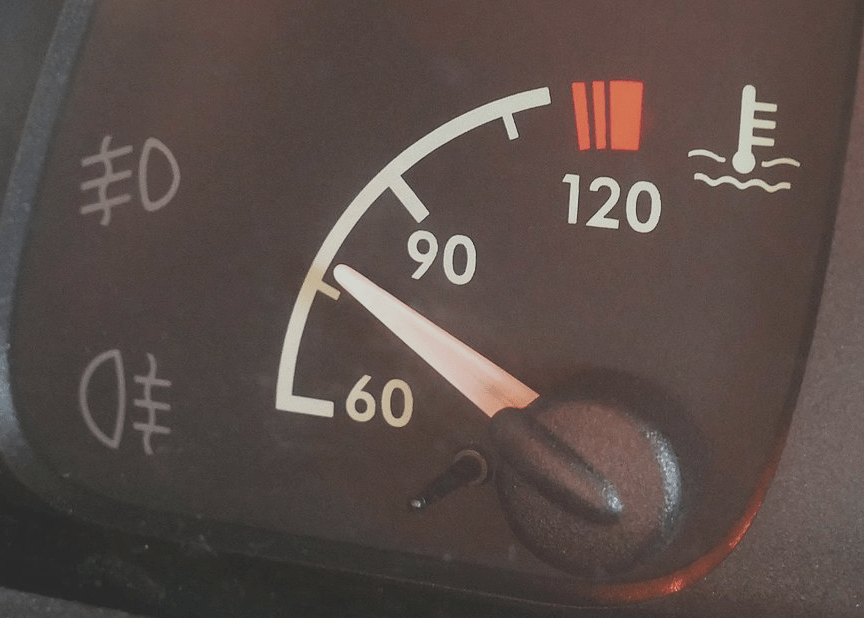 The very first place that you would want to check if your Rav4 is running hot is going to be the engine coolant.  It’s highly likely that the coolant level is low, and it’s the easiest thing to check, so start there.

You almost never have to take off the radiator cap to check the coolant level.  Modern vehicles use an overflow container.  There’s always coolant in there and it fills up a bit when the engine warms up.  It’ll have a line that says where the coolant should be if it the engine is hot or cold.

If your engine is low on coolant, the overflow container should be empty all of the way, not just a little bit.  You’re going to need the proper Toyota approved coolant and you’re going to have to fill it back up.

It’s important that you don’t pour a bunch of coolant in your Rav4 while the engine is hot.  If it’s starving for coolant, the dramatic temperature change can cause engine damage.  It’s best to fill the overflow, let the engine cycle it through for a few minutes and start over again.  This should be done with the engine cool.

Depending on the model year and the engine, your Rav4 could have a clutch fan or an electric fan.  A bad fan can cause your engine to run hot.  The fan pushes air over the radiator to keep it running cool.

When you are out on the highway, the wind passing over the radiator is more than enough to keep it cool.  You will notice that a fan is not working properly when the vehicle isn’t moving very fast.  If the engine begins to cool off when you get onto the highway and into “clean” air, it very well could be the fan.

It’s easy to tell if the radiator fan is bad or not.  When your engine is running warm, that fan should be on.  With the vehicle in park, go ahead and pop the hood.  The fan should be moving.  If it’s not, it’s almost certain that you need a new fan.  It can also be the thermostat that tells the fan when to come on or off that could be at fault.  It’s much more likely to be the fan though.

In this situation, you’ll need to take your radiator to a shop to have it repaired.  Or, you can order a new one.  Some people have success using a cure in a bottle cleaner.

Your Rav4’s thermostat is the gatekeeper that keeps the coolant from entering and exiting the engine.  While a thermostat is perfectly capable of functioning for the whole life of the vehicle, it’s still a common reason that you can be running hot.

After the engine temperature reaches a certain level, the thermostat automatically opens up.  This regulates the amount of coolant flowing through the engine.  If the thermostat wasn’t there, the engine would always run cool.  Heat is needed for efficient combustion, and for the heater to work properly.

The water pump is the engine accessory that pumps the coolant through the Rav4’s engine.  If it has a bearing fail on it, or when it is no longer being turned properly (bad serpentine belt), it won’t be able to pump enough coolant through your Rav4 and the engine will begin to run hot.

A common thing that can happen when driving on the interstate is picking up trash that blocks the radiator.  Take a look around the front of your Rav4 and see if there is anything around it.  You’re looking for a grocery bag, cardboard, or something large that would be blocking a decent chunk of the radiator.

An engine that is running hot is a big deal.  Good luck diagnosing your Toyota Rav4.  If there is anything that you would like to add, please leave a comment below.