One of the most common (and inconvenient) problems with the Mercury Sable is when it has no heat coming from the heater. Not having a functioning heater makes driving much less comfortable, and can be a sign of certain issues.

At the simplest level, there are two main reasons why the heater is not working.  If it’s not coming on at all, it’s usually either the blower motor or some other wiring issue.  If the heat is blowing, but blowing cold, it has something to do with the coolant getting to the heater core, or the heater core itself.

Sable No Heat:  How the Heater Works

At the simplest level possible, the heater works by passing hot coolant from the engine into a tiny radiator called the heater core.  At this point, the blower motor blows air across the it and the newly heated air blows on to the driver and passengers.  If the heater has stopped working in your Sable, this process has failed in one way or another.

A word of caution:  If there is no coolant in your overflow, you can refill it by adding more to the overflow reservoir.  There is almost never a situation where you would need to take the radiator cap off of the radiator to add coolant. The exception to that would be when you would have reason to believe that the hose going from the reservoir to the radiator is clogged. Anytime you’re putting your hand around the radiator or fans in the engine assume that they are hot and that the fans can kick on at any time, even without your key in the ignition.

While not having enough coolant may make your engine run hotter, it can also cause your Sable to not be able to create enough heat.  Is there isn’t enough line pressure, due to low coolant, then the heater core will not be able to get any coolant itself.

The job of your Sable’s thermostat is to regulate the temperature of the engine.  It does this by allowing water to enter the engine when it is getting hot, and by keeping coolant from entering while the vehicle warms up.

Sometimes when a thermostat goes bad, it stays stuck open.  This allows the coolant to continuously enter the engine.  When this happens it’ll feel like the heat is barely working, or you may notice that it’ll work if the vehicle isn’t moving, but if you get on the highway it stops working.

If your Sable has a built in temperature gauge, take a look at it and see if it is in the spot it is normally in after a bit of driving.  If it looks like it is colder than normal, that’s a pretty good indication that there is something wrong with the thermostat. 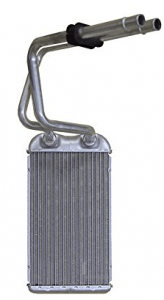 The heater core itself can go bad.  Over time, they are known to clog and fail.  If you have a heater core that clogged, it’s not going to be able to pass coolant through.  Without the warm coolant going through it, there can be no heat.  A bad heater core can also leak, so watch out for that.  Feel your passenger floorboard to see if it’s wet.

There are two hoses coming to and from the heater core.  They both should feel warm or hot to the touch with the engine on.  If one of the hoses is hot, and the other one is cold, that is a pretty good indication that the heater core is clogged.  If the neither hose has any heat, you may have air in the cooling system, low fluid, or low pressure.

If you look at your temperature gauge, and the engine is running hotter than normal, but there is not heat coming from the heater you may be having issues with the water pump.  Try taking the vehicle out of gear and revving the engine a little.  If you feel the heat start to blow hot for a few seconds that’s an indication of a bad water pump or low coolant.  Also, the serpentine belt going to the water pump going bad can it not turn as fast as it needs to.

Here’s symptoms of a bad water pump from Autoblog.

It can be tough to find why your Sable’s heater is blowing cold.  But, using the info above about how and why a heater would fail can make it a lot easier.  If there is anything you would like to add, please feel free to leave a comment below.