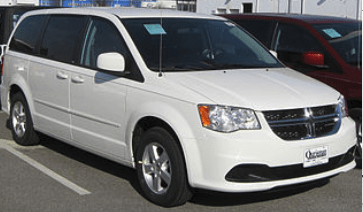 Your Dodge Caravan’s ECM (Engine Control Module) is its brain.  Just like a human’s brain, your Caravan can’t function without it. It is sometimes referred to as the ECU or PCM.  It’s all the same thing. The ECM controls and directs your entire drivetrain (unless there is a serrate transmission controller). When an ECM starts to go bad, it can cause all sorts of problems.

1. What the ECM Does
2. Bad ECM Symptoms: Dodge Caravan

What Your Caravan’s ECM Does

The ECM is your Caravan’s main computer. Almost all of the essential functions of the vehicle are controlled by the ECU/ECM.

The ECM takes all of the data from the various sensors, and uses it to operate the engine in a way that is significantly more efficient than traditionally controlled engines. It uses the data from the oxygen sensors, camshaft sensor(s), mass airflow sensor, knock sensors, and much much more to make constant adjustments to the engine. It’s so vital to the operation of your Caravan that it won’t run without one.

One of the problems with diagnosing the ECM, is that you depend on it to provide you with all the diagnostic data that you need to repair the engine, or engine sensors. When the ECM it self goes bad it can be extra challenging to determine that it is at fault.  Your Caravan does run self diagnostic checks, so it is worth it to check if there is any error code related to the ECM/PCM currently stored.  You very well get one such as P0606 (processor fault).

Here are some of the most common things that happen when your Caravan’s ECM is bad.

When you start your Caravan, the ECM will do a self diagnostic cycle. If it fails the cycle, you’ll get a check engine light. This trouble code will tell you what part of the diagnostic that it failed, and you’ll have a pretty good idea of the appropriate action to take to fix it. Now, the check engine light can turn on for a lot of reasons. Almost none of them have to do with the ECM.

As mentioned above, the ECM controls the engine timing, and air/fuel ratio. So, when it goes bad, it can knock your Caravan’s air fuel ratio off.  This could lead to poor fuel economy, the previously mentioned rough running engine, backfiring, a flashing check engine light, and an engine that has no giddy-up and go.

The ECM is the most vital piece of hardware in your Caravan. Without it, you’re dead in the water. If you suspect they are ECM is bad, you may wish to have a mechanic take a look at it. Thank you for taking the time to read this article, good luck diagnosing why your ECM may not be working. If there’s anything you like to add please leave a comment below. Have a great day!